And what was your favorite part of the trip mama?

It was all great but I loved seeing, touching, and standing on that bridge. Not the one hanging nearly 30 meters above the waterfall, the one that was built 400 years before I was born.

And there it is.

Standing as a testament.

Standing there, in just about as close to “the middle of nowhere” as you can get, is a bridge that doesn’t take anyone anywhere. 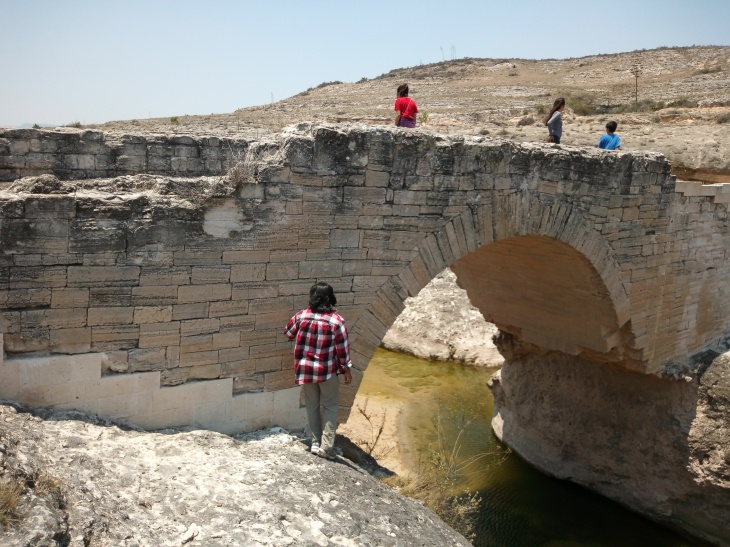 I put the palms of my hands against those stones, in awe.  The wind seemed to delight in having our hair to whip around as its presence hardly registered in the magueys, nopales, and short brush of the surrounding vegetation. Looking out over the landscape was surreal—there was not a single thing in sight that gave away the fact that we were there in the 21st century. Everything looked as it if it could have been any time, 50 years ago, 100 years ago, 200, 400 or maybe more.  There were adobe and stone houses, a few goats, maybe a donkey along the dusty dirt road. I could have stayed there much longer, after all what were these 30 minutes compared to the life of this bridge? But 14 year-olds are not quite ready to marvel over centuries, and how many times can you walk the length of a 30 foot bridge? How many people had crossed it before us? Who were they? How did they impact history?

The heavy erosion in the region means the bridge now seems to give way directly to a cliff and it’s hard to imagine that the current bridge, only about 10 feet way, was built less than 50 years ago. In other words, 50 years ago, the colonial bridge was in use, and the road continued on from either side of it, which is difficult to visualize today.  This is a place where we can marvel at how long things can last, as well as how fast they can change. We must assume that for such a solid bridge to have been built here, it once, took quite a lot of people to quite a few places.

The Colonial Bridge of San Miguel Tequixtepec, known as the Puente Colonial or Puente Virreinal in Spanish,  is 9 km north of San Juan Buatista Coixtlhuaca, 11km south of Tepelmeme Villa de Morelos, and only about 4 km from the Super highway.  The bridge is registered on the World Monuments Fund  list as one of the 67 most at risk historic monuments in the world.  INAH and The Harp Helu Fondation did some work in recent years to protect the bridge, which was in danger of collapsing due to erosion around its base. It now stands on bare rock and you can notice newer stones of a slightly different color that have been added on the underside at one end. 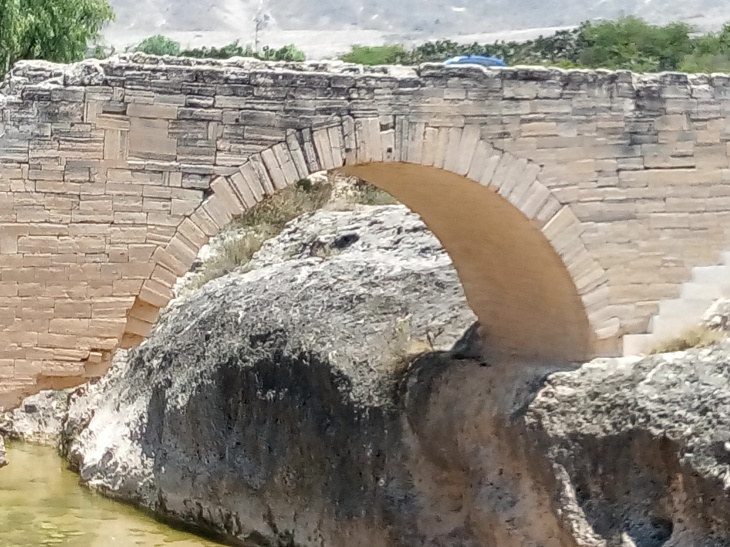 During the time before and after the conquest, this region was an important textile region dedicate to weaving and dying, especially producing the brilliant red cochinilla dye. The bridge was built over the Río Grande on the way to Coixtlahuaca by the local cacique Don Diego de San Miguel who governed from 1570 to 1596.  It was built to serve the heavy trade traffic which was bringing lots of income to the area. This had been a principal trading route between Guatemala and Central Mexico, even before the arrival of the Spaniards to the area. But the demand for red dye in Europe, brought a new boom to the region. 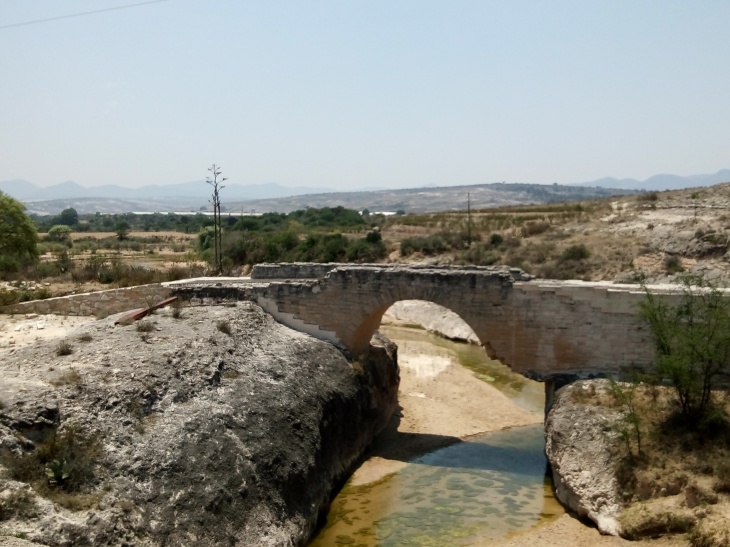 A visit to the bridge could be added to a visit to San Juan Bautista Coixlahuaca, there are other things to see in the town of San Miguel Tequixtepec (which I will make another post about sometime) or you can just stop here instead of zipping by on the interstate between Oaxaca and Tehuacan, Puebla.