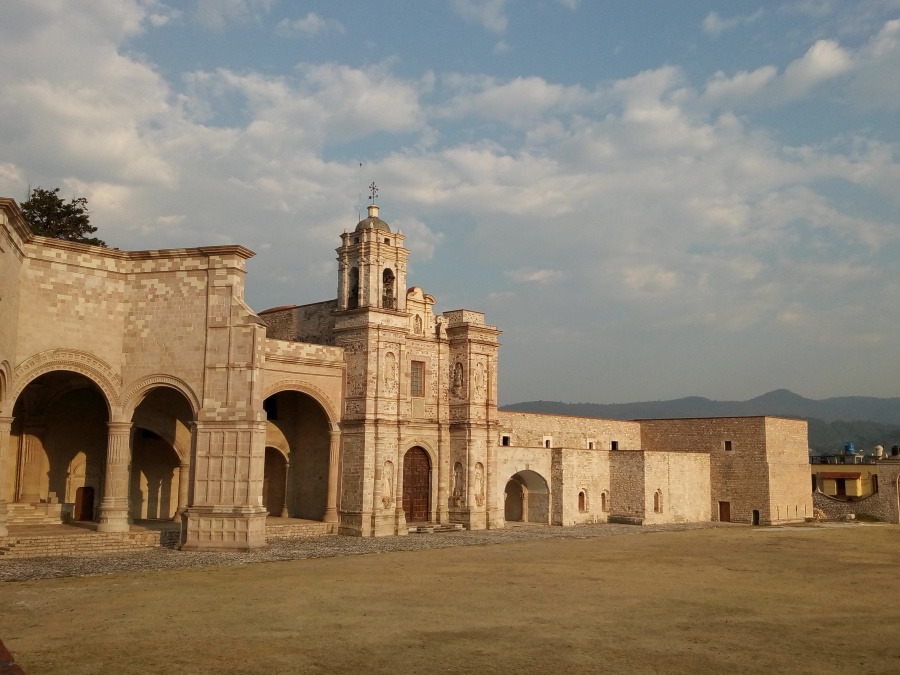 In 1529, Dominican monks arrived in what is today the state of Oaxaca. Here they found large populations of indigenous peoples with a wealth of natural resources which they used to construct massive temples and convents to aid in the conversion of the local populations. Their goal was to establish a convent at intervals of a day’s ride all the way from what is now Mexico City to Guatemala. What is known as the Ruta Dominica in Oaxaca today is primarily three locations each of which with a massive temple and the ruins of a convent. The temples are fairly well conserved as they have been in more or less continuous use, but the convents and the “open chapels” fell into ruin as there were fewer and fewer monks over the centuries. The three are Santo Domingo Yanhuitlán, San Pedro y San Pablo Teposcolula y San Juan Bautista Coixtlahuaca.

The open chapels or Capillas Abiertos are giant domed alters that allowed the monks to give mass to thousands of people in the yard before them. Many people, like my children, look around these three small communities today and say “I don’t get it”, but at the time of the conquest and the century that followed these were large population centers.

All three of the above have had significant restoration work done in the last two decades (Coixtlahuaca being the least restored), and all three now have a museum in the convent part (again, Coixtlahuaca is the least developed as a museum). And they are all three so worth visiting.

All are accessible via public transportation, and if you go that route, you should plan a two-day trip, if you go by car you can easily visit all three in one day–though there are several other nearby stops that are worth visiting.

We recently did a trip I’d call the Ruta Dominca plus, which included stops in Villa de Tamazulapan de Progreso, Villa de Tejupan de la Union, San Cristobal Suchixtlahauca, San Miguel Tequixtepec, San Juan Bautista Coixtlahuaca, Asuncion Nochixtlan, Santo Domingo Yanhuitlan, San Juan Teposcolula, San Pedro y San Pablo Teposolula, Santiago Yolomecatl, San Martin Huamelulpan, The Heroic City of Tlaxiaco, San Miguel El Grande, Chalcatongo de Hidalgo, and Santiago Yosondua. That was a full three-day trip in a private car. Most of these places deserve their own post so I won’t go into details now. There are some places on the official secretary of tourism “Ruta Mixteca” that we did not visit on this trip, I can only assume that each city had to decide to participate in the program and some did not, as I cannot imagine how they didn’t include Huamelulpan in their guide, which you can download from this link (it’s in Spanish only).