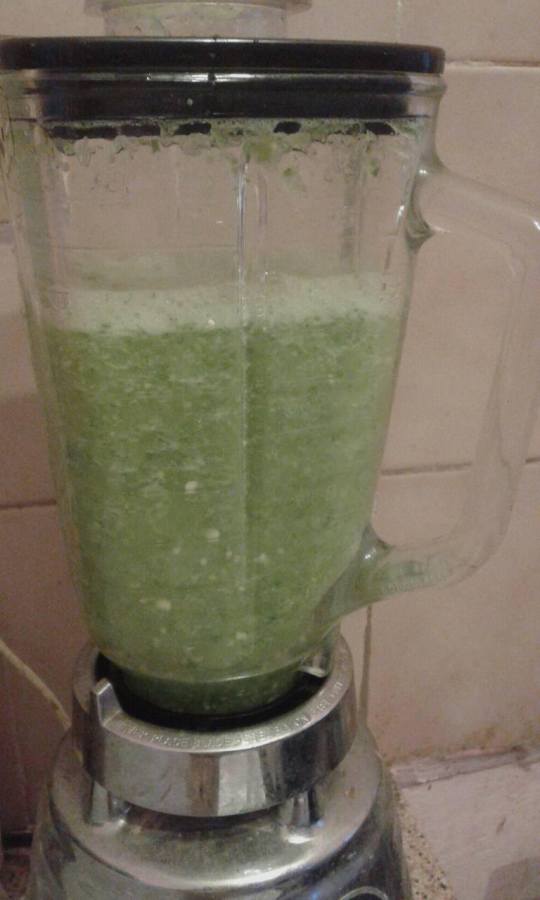 Way back in my early years in Mexico, my then boyfriend said to me—you need to add sal blanca and I thought to myself, “Sal blanca? What other kind is there?” Remember this was 20 years ago before today’s designer pink or black or whatever gourmet salt that I don’t know much about since I live deep in the Mexican hinterland. But I do now know all about sal blanca, except for what to call it in English, or even what it is exactly.

Sal blanca is the secret essential ingredient to Oaxacan, or at least Mixteca cooking. Sal blanca is not table salt, know as sal fina around here. I’ve searched the internet in both English and Spanish hoping to learn what exactly sal blanca is, and the only thing I’ve found is that Diane Kennedy referred to is as “the local mineral salt” in her Oaxaca Al Gusto cookbook. BTW, while I totally respect her immense knowledge of Mexico and Oaxacan Cuisine, I think she has the recipe that this reference appeared in wrong, because she says that this one Mixteca dish nopales are boiled in water with sal blanca, but the whole point of adding sal blanca to nopales is so that you don’t need any water—but I’ll get to that in a minute.

So I was presented with a bag of sal blanca, “white salt”, by my then boyfriend, it was a coarse, irregular material, not coarse like sea salt, more like salt that had gotten wet and some was clumped together, some of the pieces are kind of elongated splinter like and others were more like grains. I tasted it and its taste was more like baking soda than salt—“This is unrefined bicarbonato de sodio”, no he said, it was different. And tasting them side-by-side, the taste is not the same, but it’s still definitely more like baking soda than table salt. Maybe is just sodium carbonate, rather than sodium bicarbonate. Or maybe it’s calcium carbonate. As I said, I’ve scoured the internet looking for the answer to no avail.

But what is it for? You need to add it to a wide range of Mixtec dishes. It’s highly alkaline, so it balances acidic ingredients. That means anything with tomato, or nopal, and especially anything with tomatillos absolutely must have sal blanca in it or it will taste sour.  I marvel at how people can eat the enchiladas verdes I was served in northern Mexico they were so sour they made my mouth pucker.

Sal blanca is not used instead of table salt but in addition to it in salsas and other dishes.  When I lived in a different region of Mexico I took some with me and Mexicans raved about my salsas. It’s a very special kind of satisfaction to be a not-very-culinary-gringa and have Mexicans rave about your salsas. It was the sal blanca, I know it was. It’s absolutely key to a salsa verde, especially my favorite raw salsa verde.

For nopales, sal blanca draws the liquid out, making the finished product that is neither slimy nor sour. You cut your raw nopales in stripes or squares then rub some sal blanca on them and let that stand for 10 or more minutes, at which time it will look like you poured a bucket of slime over the nopales. You can put this right onto the stove and cook them until the slime has almost completely boiled away, moving continuously or they will burn. Do not add any water or oil or any other ingredient. Once cooked you can add diced raw onion, tomato, chile verde and cilantro for a delish and healthy treat.  Grilling is a popular way to cook nopales and sal blanca is also used here. You score the surface of the nopal (after the spines are removed of course!) I usually do crisscrossing lines over both sides of the whole pad just cutting through the outer skin. Then rub with sal blanca and again let them stand at least ten minutes as the sal blanca draws the water out. Then pop on the grill or griddle—try adding Oaxacan string cheese after flipping it over!

Where do you get it? In the Mixteca it is sold in bulk in dry grocers or you can usually get a few grams at the local corner store as it really is one of those, I-can’t-cook-if-I’m-out items.